Whether he’s removing remote controls, seatbelts, Barbie dolls or a platter of brownies — Pyrex pan included — from a dog’s stomach, Dr. Duffy Jones has a sense of humor.

“Did he realize he was eating glass, or were the brownies just that good that a little crunchiness didn’t matter? Kind of like the nuts in your banana bread?” he says. “Or was it a case of sheer willpower to choke it down, much the way I feel about cauliflower?” 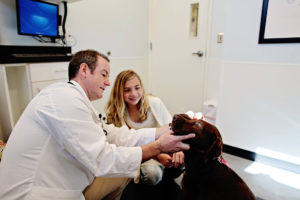 Along with humor, Jones’ human patients say he has a caring and compassionate side that makes a positive difference in their lives, by taking extraordinary care of their pets.

“His entire team worked with my family for almost four months, keeping [our cat] Maddy comfortable during her illness,” says Mary Vaughn Meredith. “He gave us his cell phone number and even met us on a Saturday before going out of town.” When Lucy Taylor-Roberts’ pug needed a teeth cleaning and extraction while under anesthesia, Jones texted her a picture as soon as the dog woke up.

“He called personally to see how Nugget was doing the next day, and his nurse called again the next week, too,” she says. Growing up in Atlanta within walking distance of Peachtree Hills Animal Hospital, Jones was interested in science and loved animals.

“My mom suggested that I get a job with our veterinarian,” he says. “I was fortunate enough that he hired me. He was a great influence on me and showed me what a great profession this is.”

After studying biology at the University of Notre Dame, Jones received his doctorate at Cummings School of Veterinary Medicine at Tufts, then began a one-year rotating internship at Georgia Veterinary Specialists. After working at Bells Ferry Veterinary Hospital and South Cherokee Veterinary Hospital for five years, he founded Peachtree Hills Animal Hospital. A finalist for America’s Favorite Veterinarian, he volunteers with Atlanta Lab Rescue, where he plays “Santa Claws” every December, bringing squeaky toys and bones to good dogs. He’s also an expert blogger for WebMD and Victoria Stilwell’s Positively, and he’s been a guest veterinarian on Animal Planet’s “It’s Me or the Dog.”

When he’s not pulling pets — and their humans — back from the brink, Jones fly fishes, shoots hoops and coaches soccer at Christ the King School. He and his wife, Courtney, have two energetic boys and one little girl. Currently, their house is run by Ellie, the Royal Cavalier King Charles spaniel; Rosie, her nemesis and fellow Cavalier King Charles spaniel; and Meatball, the formerly fat cat.