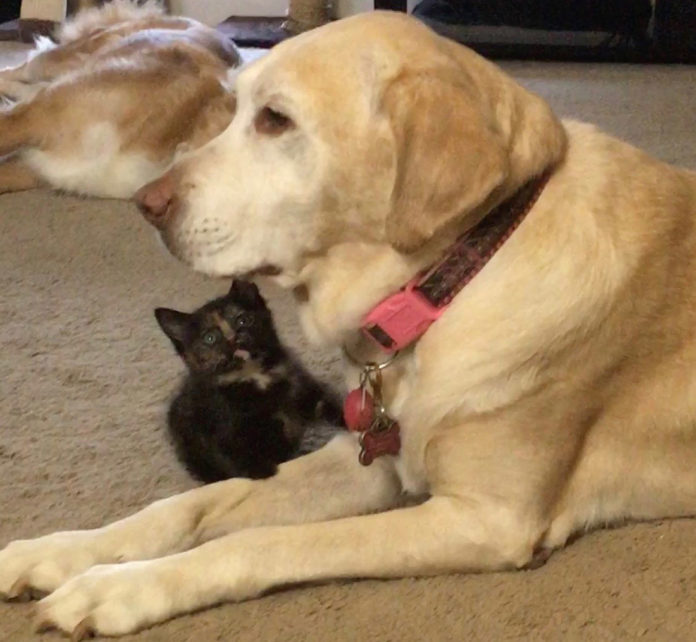 The war between cats and dogs is a topic of debate from Hollywood to hometowns.

But beyond dogs chasing cats, there are examples of cats snuggling with their canine companions or both species respectfully ignoring each other. They don’t have to “fight like cats and dogs,” but their communication styles are very different, which leads to many misunderstandings. A dog will wag his tail to show happiness and eagerness to play, while a cat does the same to indicate displeasure or anger.

In a study, researchers explored the relationships between cats and dogs that shared the same homes. They found that while cats might be the more nervous of the species, they appeared to have little trouble with asserting themselves.

The online survey of 748 homeowners found that more than 80 percent felt their pets were comfortable with one another, with only 3 percent declaring that their cats and dogs could not stand one another. While 57 percent of owners said their cats occasionally hissed, spat and swatted at the dogs, and 18 percent said their dogs threatened the cats, less than 10 percent of cats and only 1 percent of dogs ever harmed the other animal.

So how do you introduce a new cat or dog to the family with the least amount of stress and highest success rate with no vet bills?

For successful introductions, taking it slow is always best. Make sure both parties feel safe and don’t charge or growl in the initial meeting. This may mean kenneling the dog and letting the cat approach or putting the cat in a hard-sided carrier for the dog to sniff. Always make sure both have plenty of food and safe places to retreat to, if they wish to be away from the new potential friend. If growling does occur, be observant. Is the growling defensive or aggressive? If you’re not sure, consult an animal behaviorist and don’t take any chances. The first introductions are the most critical for establishing a lifelong relationship.

Here are a few myths about dogs and cats living together 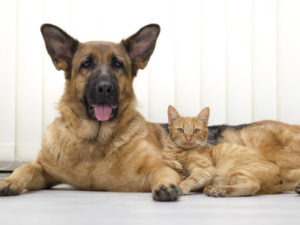 Reality: Only cats that have had a bad experience with a dog will have any information on which to base a judgment. If they are somewhat close in size, the cat may even be curious and approach the dog for a sniff. Scent will be the telling factor initially as long as the dog remains calm and non-threatening.

Reality: For the most part, dogs will chase anything that runs, so make sure the cat knows it’s safe no matter what the dog does and start out with the dog leashed or kenneled. As long as the cat doesn’t run, the dog has no motive to chase.

Myth: Dogs are aggressive to cats

Reality: Some breeds do tend to be aggressive towards cats. These are primarily breeds trained for hunting or dogs that are taught to be aggressive. The bad news is that while a cat may get in a few good bites or scratches, if a dog truly chooses to attack a cat, there may be only seconds to save the cat. Slow, careful introductions will allow you to notice any signs of aggression from either side.

Realty: Well, maybe. It is best to match your pets and not to intimidate one another by size differences if possible, but some of the most aggressive and hyperactive dogs are the smaller breeds, and the largest breeds of domestic cats are frequently the most “laid back.” However, the larger the dog, the more dangerous it may be if it does show aggressive behavior. Learning about which breeds are most likely to accept a cat friend and vice versa is more important than size. A young kitten with no previous dog experience will have little fear, even if the dog is a danger to it. Some dog breeds are just so large, they can sit on a small kitten and hurt it without meaning to. Supervision is required in all these situations during the socialization period.

Reality: Senior cats will be much less tolerant of a new dog (or cat) coming into the household, but a cat of any age can tolerate or befriend a dog if neither has had a negative experience in the past. Senior dogs tend to ignore a new cat and rarely feel threatened, but younger dogs can feel threatened and jealous of a new cat in the house. A non-intimidating, harmless kitten sitting on mom’s shoulder may be more easily accepted, but so would a kitty that grew up or was fostered with a dog if the two learned how to communicate.

Sparrow Marcioni is the chief animal behaviorist at La Maison du Chat, a Reiki practitioner and co-founder of CatRangers Rescue. Contact her at sparrow@catrangers.org or 770-831-5513.