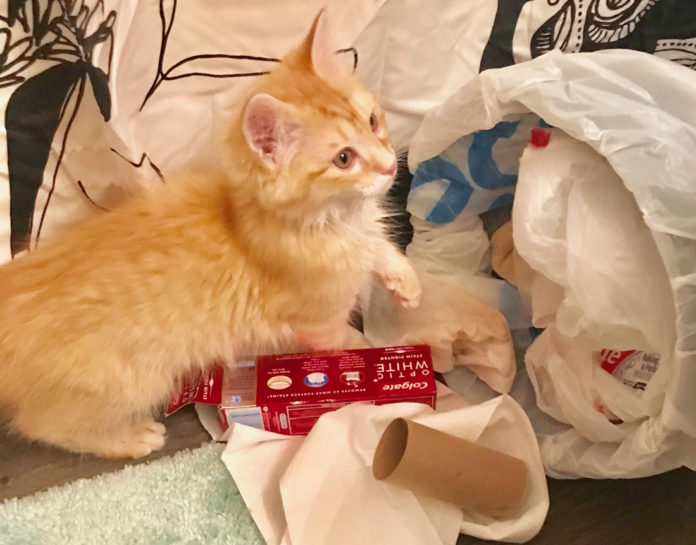 There is no way to calculate the amount of toilet paper and paper towels that have been shredded by paws of the Gazintastuffs. They seem to have an amazing ability to fit into places they don’t belong and rearrange everything they discover. From opening kitchen cabinets and closet doors to tipping trash cans and carrying off personal belongings, a true Gazinastuff can be quite exhausting to keep up with. But don’t worry: for most kitties, it is a stage of life, not a personality trait.

Like many feline behaviors, curiosity and boredom are the driving forces, and with a little patience and creative thinking, the behavior can be changed or at least modified. The mischievous behavior of always opening a cabinet door can be adjusted in several ways. You can install a child lock or remove anything you don’t want him to have and leave the doors open. You’ll likely find that he loses interest, but be certain he sees no reaction from you, whatever his response, in case it is only your attention he is seeking.

The easiest way to deter paper shredding is to hide all the paper, but that can be a bit difficult when guests need to hunt for toilet paper. Cute fabric wraps with Velcro can go over the roll, but a smart cat can defeat them. It’s the free rolling motion that attracts the cat, so the best idea seems to be placing a stick or a small wedge inside the cardboard tube that creates enough friction, so the roll doesn’t unravel easily.

With any undesirable nuisance behavior, adding fun toys and more human interaction is often a great deterrent, and most of the time, a well-exercised cat or kitten is a sleepy pet and much less likely to invade where he shouldn’t.

Then there’s the “little thief,” but is kitty stealing your stuff or playing and losing things? If kitty is truly a thief, you will probably find everything in the same one or two locations. If he’s just batting things around and losing them, they will be everywhere. To resolve this behavior, determine if lack of attention, curiosity or just collecting things he likes is the motive. Lack of attention and boredom go hand in hand, so if adding another kitty to your family is not an option, add activity toys. Puzzle games, cat treat dispensers and ball spinning toys, especially ones that get their paws involved, are often helpful. If he’s collecting things, you’ll almost always know where your stuff is. If it’s always the same item, a little dab of Tabasco sauce can be a quick deterrent, but only use a drop. If the items have a texture that your kitty likes, try to find another object that feels similar and let him keep it.

Then there’s the “you’re not sleeping, are you?” This behavior can be a difficult loop if your kitty is waking you up for attention because keeping them away from you can make the behavior worse, even to the point of other destructive behavior outside the room. Diagnosing and addressing the cause of this behavior correctly are crucial. If your kitty is getting hungry and waking you up to be fed, adding more food before you go to bed can help, but a lonely kitty can find many things to get into. Spending time before bed is always an enjoyable action. Sometimes a stuffed animal companion or a calming collar can help. (We use Nature Calm calming collars from La Maison du Chat.)

The most likely reason for night time activeness is sleeping all day and being bored. By waking you up, your cat accomplishes at least two things: He’s made something exciting happen, and he gets social interaction. Kitty has just got his clock set to the wrong time. Try developing an evening routine that begins by playing hunting games with interactive toys. Give him the evening meal and spend time grooming, then journey into bed. It will be as enjoyable for you as it is for him. And remember: A bored kitty is a mischievous kitty, even if he’s not a true Gazintastuff.

Sparrow Marcioni is the Chief Behaviorist at La Maison du Chat, a Reiki Practitioner and Founder of CatRangers Cat Rescue. She is available for consultation by emailing sparrow@catrangers.org or by calling 770-831-5513.