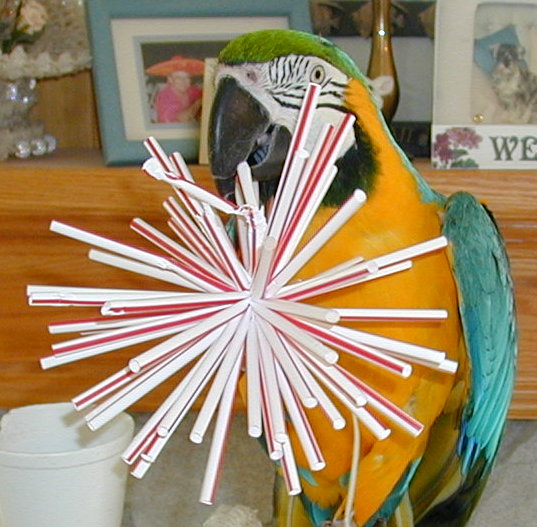 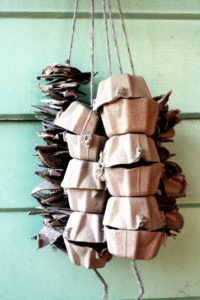 Walk into almost any pet store and you will find aisles and shelves full of toys for dogs and cats.  Most people with those animals in their homes know that toys provide an opportunity to play, to relieve boredom, for us to interact with our pets to curb unwanted behaviors and, more recently, to learn.
But many of those same people think that all a companion bird needs is a bell and, perhaps, a mirror.  That could not be further from the truth.  Birds are very active animals. In the wild they spend their days flying, foraging, socializing and even playing.  Spend a few hours watching the wild bird in your yard or other place in nature and you will be amazed at their energy level.  Companion birds have no less energy and, in the case of the larger parrots, have a high level of intelligence requiring not just physical but mental stimulation. This is especially true of birds that spend most of their time caged.
Caged, bored birds often end up with behavior issues such as feather plucking, self-mutilation, screaming, or they simply live much shorter lives.

I personally experienced this with a 30+ year old Yellow Nape Amazon parrot that was re-homed with me after his original owner passed away. When I was contacted 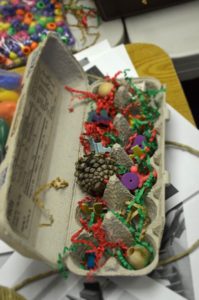 about this bird (and two others in the same home), I was shocked and saddened at what I found.  “Barney” as I will call him for this story, was sitting in a cage so small that he could not have extended his wings. In that cage was one perch, a food bowl, water bowl and a large parrot that was obviously in trouble.  Barney obsessively spun around in circles on that perch while at the same time turning his head rapidly from side to side and muttering to himself. He would stop this behavior only for a moment when you talked to him. I found out that he had spent over two years living in those conditions and I was concerned that maybe the mental damage could not be able to be undone. Still, I brought Barney home (I found wonderful homes for the other two birds there) and began working on what I hoped would be his recovery. It took a much larger cage, the gradual introduction of both store bought and homemade toys as well as a lot of patience but eventually Barney recovered.  I had to teach him how to play by playing with the toys myself and by rewarding him with praise when he showed interest. The spinning and head twisting stopped for the most part and only appeared if he was frightened by something.  He had learned to play. He now has the room and the “tools” necessary to keep him from being bored.   Two years 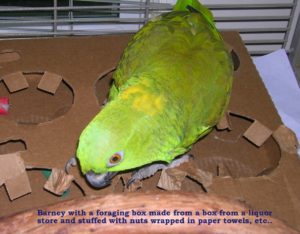 later, he also found a home where he still lives today as part of a busy family who put time and effort in to keeping him happy.

The aisles of your local pet stores don’t usually have as many toys for birds as they do for dogs, cats and other small animals. The toys they do have for bids can be pricey. Most pet toys are designed to be chewed up, splintered and shredded and are not meant to last.  It’s also a good idea to rotate toys in and out of the cage so that the bird does not become bored. I have between 7-9 birds in my household at any one time, I purchase a few toys each year and make many more myself and have a house full of happy birds.

Safety and size should be the first considerations when buying or making toys.  Check to make sure that there are not sharp edges, open “s” hooks, pieces that could be swallowed.   If the toys have rope or string, make sure to check it often for frayed pieces that could trap a toenail.  I do a toy check every day when I am feeding and cleaning.

From finches and canaries to parakeets and all the way to the big macaws, toys will be a welcome addition to your bird’s life and should be considered a necessary part of bird keeping. 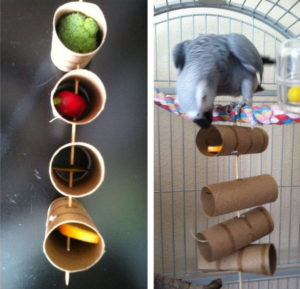 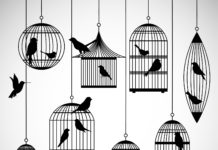 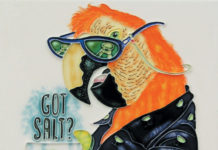