Area known for restaurants and shops enhances spaces for dogs

The city of Decatur has a reputation for outstanding restaurants, shops and housing options. To enhance that, city leaders decided several years ago to make Decatur welcoming to furry friends with the opening of three dog parks, including Oakhurst Dog Park, a natural, serene setting among the city’s other assets.

“Many of our residents were using the local athletic fields as a place to walk their dogs, so we decided to give the dogs their own places where they could enjoy the outdoors with their owners,” said Gregory White, Decatur’s director of Active Living.

Along with benches for the humans and an agility sliding board for the dogs, the park features a lower open area and an upper forested area that offers a lot of shade along the mulched trails, native plants and artwork.

The city maintains the park, taking care of the fencing, water fountains and signage, and providing supplies like waste bags, but it’s an army of volunteers who handle the day-to-day oversight and beautification. Volunteers show up by the dozens to pitch in during regularly scheduled workdays to spread mulch and beautify the park.

Lee Goldsmith, one of the active volunteers who frequents the park with his 8-year-old hound, Piper, says one of the things that makes this park so unique is the community of people who have come together to make it better.

“There are a lot of people who put a lot of effort and time into the park. It is a great community and it makes for a healthy, clean dog park,” Goldsmith says.

Oakhurst Dog Park is also home to a number of native birds and birdhouses and is the first dog park to receive the Audubon Society’s large property wildlife sanctuary certification. Ellen Mathys, a Decatur resident and Oakhurst volunteer, created a pollinator garden there about three years ago. She asked the city for funds to put in a couple pollinator plants, and officials in turn asked her to expand the vision into a 1,300-square-foot project robust with native plants.

“When the city made its offer, I accepted the challenge,” she says, adding today she relies on other volunteers to help mulch and weed the garden.

Mathys visits the park about four times a week with her three dogs, Bella, Emma and King.

“It is a community meeting place and because so many new people are moving into Decatur, and the park provides a nice opportunity for people who are new to the area to meet their neighbors and socialize,” she says. 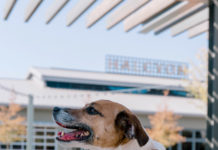